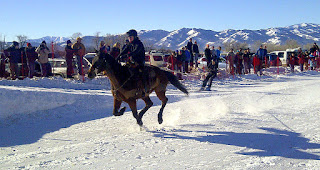 This past weekend was the 2nd Annual Teton Valley Great Snowfest, and it was impressive. The above photo was from the Skijoring event, where a horse pulls a skier or snowboarder with a rope (like winter water skiing). The course involves jumps and weaving between cones, with the fastest time winning. It was one of the most unique and fun events I've ever watched. 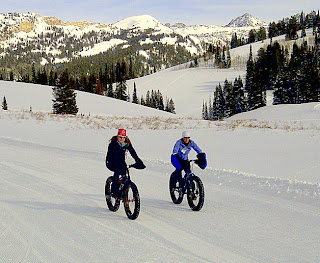 There was also lots of snowbiking, including a race up at Grand Targhee, where fatbikes are allowed on the groomed Nordic trails.  This is Melissa making a lap with her good friend Britt.  Skies were bluebird, and snow conditions were perfect. 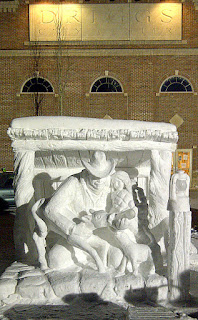 A snow sculpture contest took place in front of the Driggs Community Center, and the creations were amazing. It gave a festive feel to downtown, especially after dark when the scene was illuminated. This cowboy sculpture took top honors. 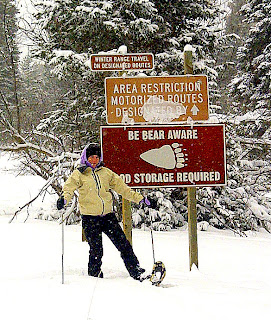 Snowshoeing around here can't be beat.  We braved sub-zero temps last week, and got out for a nice mid-day hike.  The bears are hibernating, of course, and missing out on all this winter fun. 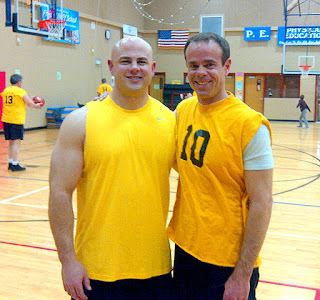 It's basketball season now, too.  I play on a team in Jackson, and my brother Mark made the drive up from Salt Lake to play with us last week (o.k., he also had work in the area), like old times.  We got a nice win, and it was awesome catching up with him. 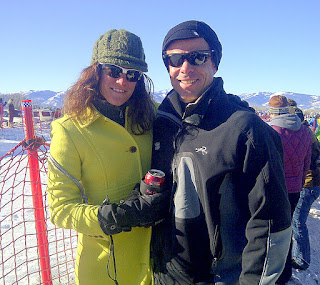 Sunshine & smiles, even in the middle of winter.  Melissa did a big trip to South America over New Year's, and it's good having her back...to say the least. 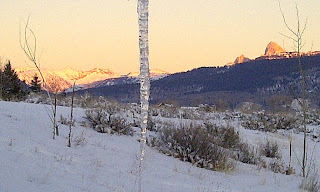 I'll never tire of watching the sun set against the Tetons.  An icy stalactite recently formed off my deck, and now joins me for the view.  Happy Winter!

Nice update. Like the kid with the HUGE bike mittens and the bright yellow peacoat. :)

Thanks, Mark...I kinda like her too :) And nice blog yourself!