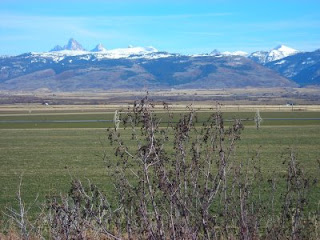 We continue to enjoy an extended Indian Summer here in Driggs, and I took advantage with a bike ride around the valley last week. The low light angle this time of year makes the views completely unique, and the snow-capped Tetons are a reminder that winter is indeed at the doorstep. After a winter that lasted into June, we're all appreciating the extra sunny days this fall. And, what would fall be without football? 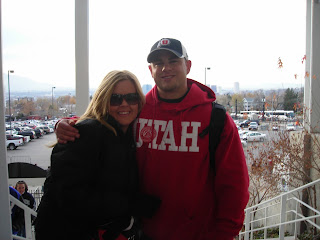 My brother Mark - who used to live & work with me at R.U. Outside here in Driggs - is now in Salt Lake with his awesome wife Annie. They have season tickets to University of Utah football games, and invited us down for the final home game against hated rival BYU. Joanne & I met at the U of U twenty years ago, and were thrilled to make the drive for the occasion. Utah is undefeated, and a win against BYU would almost guarantee a major BCS bowl game. 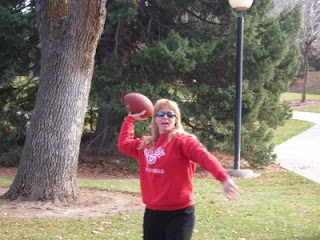 We warmed up by meeting Joanne's brother Mark (yes, same name) and several friends for tailgating, games and a little football of our own. Joanne throws a mean pass, watch out! Basecamp was just outside the good ole' Union Building, and we visited the student government room where Joanne & I met...and then randomly ran into my buddy Matt Z who scoped Joanne out for me back in the day. Later, at the game, we ran into Joanne's friend Melyssa who scoped me out for Joanne. It was a feel-good day, and whoever says life isn't a circle must be a BYU fan. 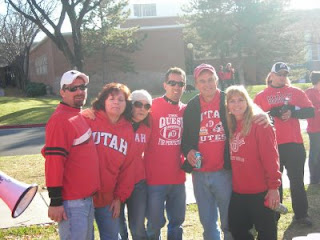 The Schilleman family stopped by as well. Joanne guided them on a horseback trip into the Teton Wilderness years ago, and they still talk about it. We knew they were cool, but seeing all the Utah shirts confirmed it. 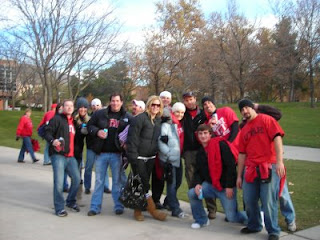 As game time neared, I could feel that visceral competitive fire building. I love it, and my brother Mark was right there with me. We circled the troops for a final big "Go Utes" chant, then started the hike down to Rice-Eccles Stadium, Flo-Rida blasting. There's nothing like going to battle, and team sports/spectating/concerts seem to fill the void in today's computerized world. Bring it! 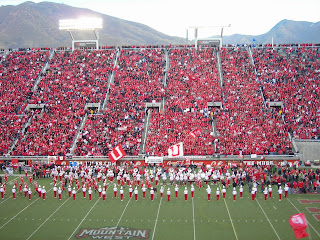 So, it had been 18 years since Joanne & I attended a Utah football game...and holy cow, it's way more big-time now. Stadium capacity is twice what is was, and of course the actual football team is twice as good as it was, too. The big breakthrough came back in 2004, when Urban Meyer coached us to an undefeated season and then promptly moved on to coach Florida. New coach Kyle Whittingham is proving to be just as good, and the program continues to roll. 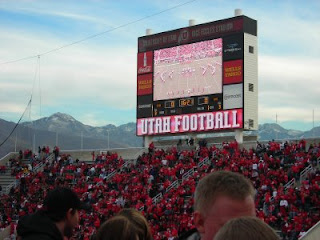 What a game! BYU's QB Max Hall is now my favorite player, as he just kept throwing the ball to Utah defenders. We dropped most of them in the first half, but started holding on and making plays in the second half. The crowd was wild the entire game, it was absolute greatness. Utah QB Brian Johnson was nearly perfect, and the Ute game plan flat-out worked. Final score: Utah 48 - BYU 24, making it a perfect 12-0 Utah season. Huge thanks to Mark & Annie for inviting us down. 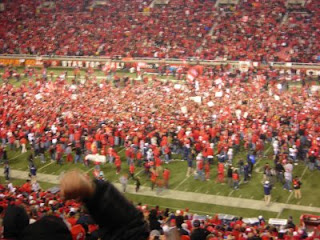 Pandelirium (my own word) erupted, and the crowd stormed the field after, taking down the goalposts and chanting "BCS, BCS!!" Being a little, umm, older than most, we remained in our seats and simply took it all in. Not many scenes like that in Driggs, Idaho :-) Utah is now the highest-ranked undeated major college team in the country. They're ranked 6th in the polls, and will just wait to see which bowl they'll be playing in. I'm predicting the Fiesta Bowl, probably against Texas Tech. It would be a barn-burner. 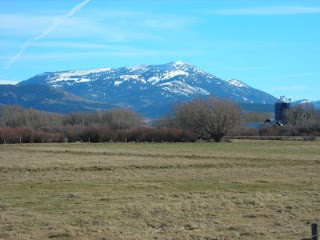 Speaking of barns, we continue to wait for snow back home in rural Teton Valley. This photo shows Taylor Mountain in the background, a favorite backcountry skiing spot. We definitely need more white stuff before the boards and sleds come out.

In the meantime, while we wait: Happy Thanksgiving to you and yours...and Go Utes!
Posted by Rick LaBelle at 9:13 AM

We loved having you guys at our little home! What a great weekend. xoxo