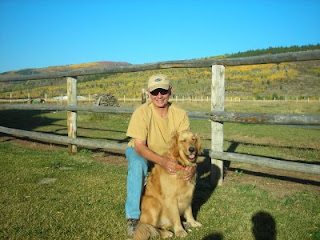 As a boy, my dad enouraged me to find a place outside I could go to think, whether it was the top of a mountain or the side of a creek. I did, often, and that was probably the genesis of later starting my R.U. Outside business. Funny how it often takes a few decades to really understand our parents' wisdom (dad is pictured here with Bridger, in my backyard a couple of weeks ago).

In the process of pedaling bikes and riding snowmobiles up and down mountains, and fishing many creeks, I learned that the natural world is much more stable than the human world. By going outside, we connect more directly to what's inside each of us. Maybe time in the woods should be mandatory for everyone on Wall Street and Washington, D.C. these days. 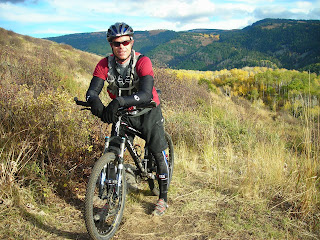 I majored in Economics (and English) nearly twenty years ago, and took several courses in International Economics. It was fascinating, and real to me because of time I had spent in Europe. I wrote papers on "Stagflation," "International Relations," "Inverse Supply-Demand Curves," and "International Monetary Policy." It all made sense on paper, and I never imagined I'd hear the words "Global Economic Meltdown" in my lifetime. Yet here we are, with those words ubiquitous in news stories this week. 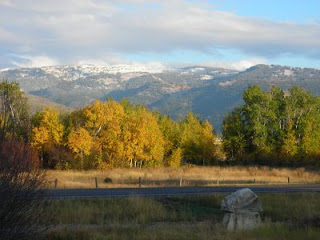 What happened? Well, a lot, and much of it was borderline criminal. As for "how did it happen," here's my take: beginning in the 90's and accelerating with each passing year, the U.S. has transitioned from a Production Economy to a Consumption Economy. We don't make things here anymore. I didn't realize the extent of this until 1993, when I went to Taiwan to meet with a potential product manufacturer for my business. They told me "Rick, this is good arrangement. Here, we like to make things; there, you like to buy things." I'll never forget that line. As a result, the slippery profit-seekers in this country had to invent new ways to grow GDP and line their pockets...like twisted loans that fueled the housing boom, all made easier by the instantaneous worldwide communication of the Internet.

To compensate for the exponentially expanding trade deficit, our government has been borrowing increasingly large sums of money from other countries. I mean, a trillion-plus dollars of debt takes time to accumulate, doesn't go away easily, and inevitably drags others into the pit. I'd say it's time for America to start some new habits, and re-awaken good old habits. Let's make things here again. 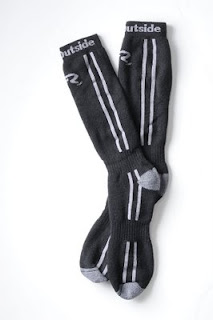 I would gladly...nay, gleefully...purchase as many R.U. Outside products as possible from U.S. factories, if the manufacturing facilities existed. I'd pay a little more for the honor of made-in-U.S.A. products, and I think other company owners would, too. But, the production capacity needs to be rebuilt.

Currently, we're able to make R.U. Outside socks and a few neoprene support products domestically, but that's about it. Tooling and materials for boots, gloves, headwear, gadgets and even fleecewear has slowly and steadily migrated overseas since I started the business in 1992. Let's bring it back, folks, and watch the economy improve sustainably. 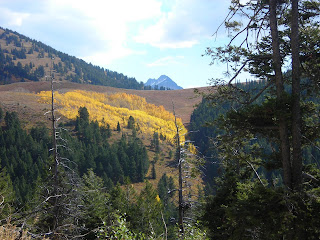 What does all this mean for Driggs, Idaho? First, it has become obvious that the local economy was riding much too heavily on the real estate and housing boom. Nearly half the population of Teton County was working in Title Companies, Construction, Development, Banking, or Real Estate (we have four resort golf courses underway, and this in a valley with only a sixty-day growing season). Those numbers will decline, which will be a good thing in the long run. Maybe some family Potato and Barley farms will survive, now that land prices have declined somewhat. And, most likely, Driggs will emerge as a recreation-based economy, with the continued expansion of Grand Targhee ski resort and the enduring beauty of the mountains.

In the end, having someplace to go and think is priceless.
Posted by Rick LaBelle at 9:25 PM 3 comments: 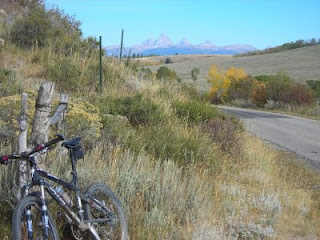 This past week brought to mind one of my favorite literary quotes (yes, I do still remember a few things from college), by 18th Century British writer Mary Woolstencraft: "The ideal human existence is a continual back and forth between civilization and solitude." Amen. We get plenty of wilderness solitude around Driggs, and if you mix in occasional travel to the city you've got it covered. 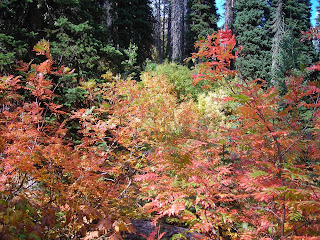 We've enjoyed nearly unprecedented fall warmth and sunshine around here recently. After such a late start to summer (we had snow every week through the middle of June, remember!), this Indian Summer finish has been savored by all. Hikes and bike rides, fishing on the Teton River, and even late season golf have all been stellar.

I couldn't pass up this colorful photo, love the contrast with the evergreens. 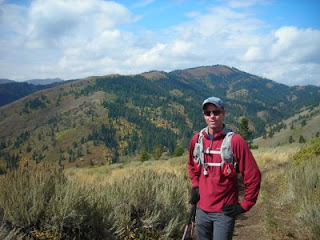 Joanne, Bridger and I did a great hike up to the Big Hole Crest Trail last week, just as colors were really kicking in. We typically access that trail via Corral Creek on our mountain bikes, but decided to go up via Grove Creek on foot for a change. This photo shows Red Mountain in the background, aptly named for the unusual red dirt found on its slopes (this isn't Moab after all, it's Driggs...but we do have a little red dirt around here). 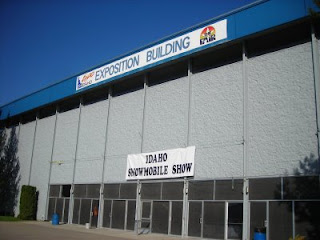 Eventually, work called and we headed west across the state to Boise (which is a 5-plus hour drive...Driggs is actually closer to Salt Lake City than it is to Boise). R.U. Outside was displaying at the Idaho Snowmobile Show, so it was a couple days of work before the playing could commence. It was great to hang out with my guys Andrew and Kyle who drove the trailer up from Logan ("the boyz"), plus nice to see lots of longtime industry friends. Hanging out with y'all Friday night at The Reef in downtown Boise was epic. Who knew the Violent Femmes would be back in so soon? College kids today share some of the same music tastes we had just a few, umm, years ago. 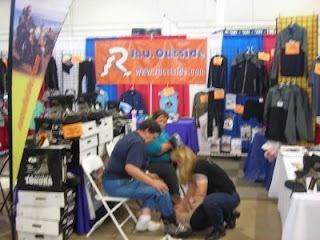 I know, it's blurry, but this pic shows Joanne hard at work selling R.U. Outside boots. This is the glamorous stuff that allows us to live in Driggs. We've been schlepping product and doing mail order/internet sales for seventeen years now, and our feet & backs can feel it :-) On a serious note, the show was good and the people were great. Nearly everyone in Boise seems to have a smile on their face. Maybe it's the Boise State football team (perfect record so far), or the perfect weather, or the fact that they live in a perfect-sized city that offers all the amenities without overwhelming crowds. Regardless, we loved it. 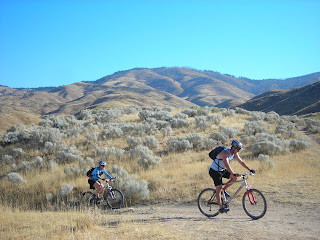 The show ended, and we joined our Boise buddy Aaron for a big mtn. bike ride in the foothills. Boise is a metro area that truly "gets it," and boasts what is arguably the best urban-area trail system in the country. It started with their Greenbelt along the Boise River decades ago, and then spread to a plethora of candy-sweet trails in the foothills. All together, it's called the Ridge to Rivers trail system, and it rocks. The soil is like beach sand, so it drains water efficiently and is ridable nearly year-round. Yes, mountain biking in Idaho in December and January is a reality! Sign me up. 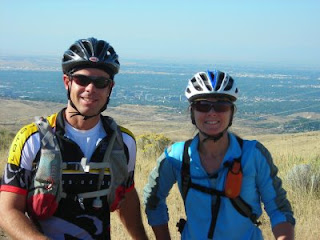 Here's a shout-out to Aaron for the expert guiding, and photography. Thanks, man...Joanne and I went home with big ole' grins. I've said it before, and I'll say it again: if I ever return to city living, Boise is at the top of the list. 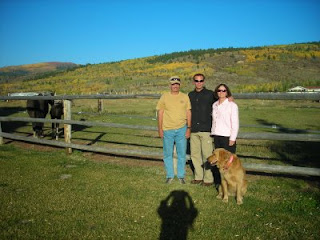 We made it home to Driggs just in time for mom and dad's last day in the area. They always hang out in Jackson in late September, taking in the colors and the elk bugling in Teton Park. They're doing great, and it was awesome having them at the house for an evening of catching up. We gave them specific instructions to return again next year, and bring this perfect fall weather with them. I think it's a deal.
Posted by Rick LaBelle at 9:43 PM 3 comments:
Newer Posts Older Posts Home
Subscribe to: Posts (Atom)